Material design was all done by Zsombor except for the EMI ones.

Before coming to US

An electrical bill has to be paid in advance. It was sent to and paid by Farid.

Furniture for a 10'x10' booth was included in the price for an research exhibition booth, however it must be ordered in advance. Oxana tried to order the furniture through the Freeman website, however it was not possible, and she then wrote to Freeman Support asking how to proceed. A dubious answer was given that no order had to be placed...

A meeting was arranged in Lund on October 27'th in order to plan the exhibition. Oxana, Balazs, Florido and Martin was present, while Zsombor was connected through Skype. The A-REX poster shown at EGI Tech 2011 in Lyon was used as a starting point for the planning. Here it was decided to use the Tyranosaurus Rex as a theme for the booth. And the idea was to buy a large infatable dinasaurus which were able to hold the A-REX poster in its hands. It was decided to show three posters - the A-REX poster, a poster about the file staging and caching system and a timeline marking events from the 10 years of NorduGrid, adding a dinosaurus and viking ship, respectively symbolising Scandinavians and A-REX. The format of the timeline was chosen such that it could fit in fron of a 6' table. It was also decided to compile a slideshow and show it in the booth.

In US before the conference

Florido arrived in Seattle on November 10'th 4 days prior to exhibition opening, while Martin arrived the 12'th. Florido used some time before the opening trying to find an infatable, however unsuccessful, so instead a platic T-Rex (30 cm heigh), a 3D tree T-Rex puzzle and two puppets squirrels were bought, which with the idea of using them as adornment on the table in the booth. 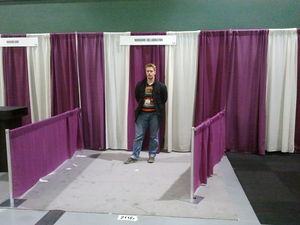 At arrival to the booth location at the conference, it turned out there was no furniture (table and chairs). Therefore we had to go to the Freeman service company booth, where we ordered the furniture. This order was not free, and the amount was charged to Martin account.

Note: For future SC events, remember to order the free furniture for the 10'x10' research booth in advance, and make sure they are ordered!

Half an hour after placing the order furniture arrived. Not having pre-ordered furniture was a major drawback as we didn't receive the invitation material for parties and other things, so we missed some (material was placed on tables in the morning of the first booth setup day).

Wireless networking was quite crappy, Martin couldn't access the network the first day. From time to time another very unreliable network show up. The reliable one, I have never seen it neither with my laptop nor with my android phone, must have been running on 5 GHz. If network is needed at future events, it is strongly recommended to pay for wired network.

Posters and banners were laminated. This is really important! Makes it easier to transport and move them during the setup. Other than that, Seattle is a very rainy city.

Bringing a platic poster container (e.g. this) was really useful and protective for the posters. It prevented rain to mess up all the material we had.

For hanging the posters, Florido had bought two sets of two metal strings, designed for hanging posters, however the magnets which came with the strings were not able to keep the posters hanging, so tape was used instead (laminated posters were crucial here). To keep them open, they had plastic hangers on the top and bottom. To keep them straight, strong cardboard were taped on the back. This made the poster look really nice while hanging. We borrowed cardboard from a rubbish bin, Recycle Reuse Reduce!

Looking at the others around us, we agreed the very best for a booth is to have a roller banner. As you can see the measures are more or less the same as the banner we produced this year, and is by far handier than hanging posters. It's a relatively cheap, portable and elegant solution. Remember for next year!

The NorduGridG 10 years banner was placed in front of the table using stylish white clips on the cloth and using the same cardboard technique as for posters to keep it straight. Sizes were perfect (180x80cm). It turned out to be cool and we even had people stopping and taking pics :D.

On top of the table, we put an holder for leaflets. Around the holder, a puppy dinosaur (holding the EMI bookmarks in its hands) and a 3D dinosaur puzzle guarding. (pictures later) Under the dinosaur puzzle, a call for people to the ARC Open Source project.

On the other side, a dish full of nuts lied guarded by two puppet squirrels. In front of the dish, a paper saying "ask us about the caching system!"

A tripod with foam board was placed behind the table and a projector on it showing facts about NorduGrid and ARC. [Presentation here]

Besides the three mentioned posters, a big NorduGrid logo banner was brought to Seattle. Two cardboard boards were used to keep the it standing on the right side of the booth. The banner was attached to the cardboards by white clips as well.

[Picture of booth when prepared]

Note: Florido was sick on the second and third day of the exhibition, and thus completely missed the main days. Being one in the booth is painful and not advisable, and you are not able to move around much. One more person (three) for the booth is better, or at least share one person with some other booth (we could do it, but also the EMI booth was out of personnel)

The opening (14'th) was nice, we were close to a food table so we had people passing by or looking while in the queue.

The posters were the main reason for people to stop. Then looking at the table, they were attracted by the squirrels more than the dinos.

Everybody asked if we gave away the squirrels as gadgets. People looks for gadgets for their kids or relatives mostly, so one must focus on useful/nice/cute/funny things as gadgets. For this exhibition we wanted to find suitable gadget however time and budget didn't allow for that.

Below is a list of the people that stopped at the booth. In the following, unknowns means that for some reason we couldn't have names/references. Names have been replaced with initials for privacy reasons. Contact info has been removed. Please ask Florido for actual names and contact info.

No relevant people really showed up on the opening evening.

People: Total 14 of which 6 unknowns

People: Total 16 of which 10 Unknowns

People: Total 14 of which 2 unknown

Why installing a CE on a cluster, instead of facilitating remote login?

All in all we consider the NorduGrid exhibition at SC11 a success. However there were some ups and downs which can be worth to know of for future exhibitions.

Be sure to order the free furniture for the 10'x10' research booth in advance through Freeman (or similar), and ask for deployment of the equipment to avoid problems upon arrival. It was no problem ordering furniture at the location, however it is expensive.

The planning of the exhibition booth started on 27'th 2 and a half week before the exhibition began. That is way too little time for designing and printing posters, buying or getting a poster wall/roller banner (see above), ordering and buying gadgets and adornments, etc.

Bringing tape, scisor, utility knife and other such things was useful. We did however not bring paper, for taking notes which we missed.

Arriving 3-4 days before the begining of the exhibition was really helpful in our case, since the time up to the exhibition was used for purchasing stuff for the booth. Of course this can be done at home, but some things might not be handy traveling with.

We began setting up the booth one day before the exhibition start, which was plenty of time. However getting the posters to hang nicely in the booth was quite time consuming and messy. It took at most 6 hours to setup the booth, however most of that time (75%) was used for hanging up the posters in a nice way. Note: Buying a roller banner or something similar makes the booth setup a lot easier and faster.

People were very attracted by the fact that the booth was very different from all the others. I.e. a theme without relation to computers. It seemed people loves cool posters, or atleast the poster we showed. Also, people were/are very attracted by gadgets, either for themselfes but also for kids or relatives. Some people also stopped at the booth just to eat nuts. Having some food is also a good idea. Being different is the way to attract people. No real need for gigantic things, the small things we had did most of the trick.

When talking to people in the booth we tried to take note of their name and affiliation, and their interest. Asking people for their contact details should done in relevant cases.

Martin took care about it. This year booth was very good, it was on a T junction. People coming from every direction could see us. In case the neighbours have both walls, we still are sure that people coming from the front will see us from far away.

It is also true that most of the people just walks close to the entrance. Therefore Martin choose a booth which is basically

[Picture of booth location for next year]

Having a wall behind was of help but didn't change things so much. Next year's booth will NOT have a wall behind.

Ideas for the booth

Giant inflatable T-REX holding something, could be a "feed me" thing or the A-REX poster

Since I am experiencing problems making the gallery work, here's a picasa album:

Read through the exhibitor info