This page describes how to set up DTR over multiple hosts. This is possible using ARC release 11.05 (ARC CE version 1.x), however the code for multi-host data staging in that release was at development-level and contained several bugs. It is therefore recommended to only use release 12.05 (ARC CE version 2.0) and above for multi-host data staging, and all information on this page assumes running at least version 2.0 of ARC CE.

Under the old staging system, it was possible to spread the transfer load over multiple hosts by deploying several A-REX services (or Grid Managers) and one GridFTP interface. The GridFTP interface randomly distributed jobs over the control directories of each A-REX. In DTR the split is done at a much lower-level - between the Scheduler and Delivery layers - so that the remote hosts only perform simple point-to-point transfers between physical endpoints and all the logic is kept in the main A-REX host. This has many advantages over the previous system:

Several options for how to implement multi-host staging were considered, for example:

The last solution was chosen as being the cleanest design and easiest to implement due to the existing HED framework. This datadelivery service which implements the Delivery layer has been developed within HED and can be deployed on one or many remote hosts. Once a DTR has passed all the pre-processing steps and is ready for transfer, the Scheduler can send it to a remote datadelivery service to execute the transfer. The Scheduler will then poll the request until it has completed. The Scheduler spreads randomly the total number of transfers (up to the configured limit and depending on the configured access rights of each service) between all the staging hosts.

The architecture is shown in the figure below. The datadelivery service on the remote host acts as a very simple Scheduler which sends all transfer requests it receives straight to Delivery. 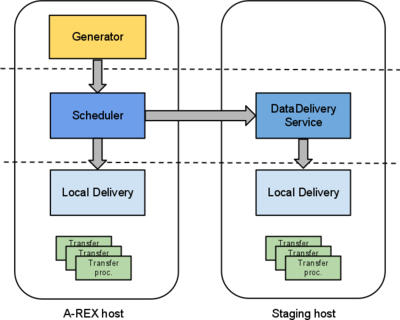 No extra components are necessary on the A-REX host.

For the remote staging hosts, the package nordugrid-arc-datadelivery-service can be found in the EPEL, NorduGrid or EMI repositories, or is built automatically when building the source tree. This package should be installed on each remote host. It depends on some core ARC packages and the usual external packages that an ARC installation requires.

ARC version 2.0.0 (release 12.05) contains a bug where which means nordugrid-arc-arex must also be installed on each remote host, as it contains an executable that the datadelivery service uses. However the A-REX service should not be started on these hosts. In version 2.0.1 (release 12.05 update 1) and above this bug has been fixed and A-REX is no longer necessary.

IMPORTANT If support for GridFTP transfers is required then the nordugrid-arc-plugins-globus package (and associated Globus dependencies) must also be installed - it is not a strict dependency of nordugrid-arc-datadelivery-service.

CA certificates are required on each remote host to authenticate connections with storage services. Depending on the ARC version and local set up, each host may also require a host certificate (more info below).

The log file for the service can be found at /var/log/arc/datadelivery-service.log (configurable - see below). If logrotate is running, this log will be rotated every day.

By default the datadelivery service runs with TLS enabled and a host certificate is required for each host. The path to the host credentials may be specified by the usual x509 options. If running more than one service, these x509 options can be specified in the [common] block of arc.conf. In ARC version 2.0.2 (release 12.05 update 2) and later host certificates are no longer a strict requirement and it is possible to run without TLS using the secure=no option. This means that A-REX can no longer verify the authenticity of the remote hosts and so the decision to run with or without host certificates should be based on local site policy.

The following configuration options are supported:

Since the service can copy files to and from the service host, it is dangerous to allow open access to any clients. Usually allowed_ip is set to the IP address of the A-REX host since this is the only host which should have access to the service. The service can be further locked down by specifying authorized DNs so that only certain users are allowed to have their jobs' files staged by the service. Note that DN filtering is not possible if secure=no is specified.

It is also dangerous to allow requests which can copy to or from anywhere on the host filesystem, so filesystem access is restricted through the allowed_dir parameter, which specifies the path(s) that requests are allowed to use. An allowed_dir should be specified for every cache and session dir. In some situations it may be desirable to set for example one cache per remote host where the cache is local to the host. A-REX checks on start-up which dirs are accessible by which remote hosts and uses that info to direct the DTRs to the right hosts.

It is vital that the cache and session file systems are mounted on the same path on the A-REX and each remote host, as the system assumes that a transfer to the cache or session directory can be done using the same path on all hosts. It is also vital that user accounts are in sync across all hosts, so that a user represented by a uid on the A-REX host maps to the same account on all the remote hosts. No mapping of DN to local user is done on the remote hosts, and so no mapping infrastructure like gridmap files is required. The local user id of the user owning the transfer is passed in the request to the service and the transfer process is executed under that uid (except when writing to cache, when the root account is used).

The service is started and stopped by the init script arc-datadelivery-service:

The configuration for setting up A-REX to use remote datadelivery services uses options in the [data-staging] section of the regular arc.conf.

Multiple remote datadelivery services can be specified, and the Scheduler will randomly divide DTRs between those services where the transfer is allowed (according to allowed_dir configuration on each service). The presence of a datadeliveryservice option turns off the regular "local" delivery on the A-REX host so only the remote service will be used. If it is desired to also do transfers on the A-REX host, localdelivery="yes" must be used. If no remote services are specified then local delivery is always enabled.

If the datadelivery service is running with secure=no then https should be replaced by http in the deliveryservice URLs.

Normally the credentials of the user who submitted the job are used for communication between A-REX and remote datadelivery services, however for extra security it is possible to use the A-REX host certificate for this instead, by specifying usehostcert="yes". In this case the host cert is only used for establishing the secure connection with the remote service, it is still the user's credentials which are delegated and used for the transfer. The host cert must also be able to be used as a client certificate, in other words must have the X509 extension "X509v3 Extended Key Usage: TLS Web Client Authentication". This option has no effect if the datadelivery service is running with secure=no.

Communication with remote services involves some degree of overhead such as the SSL handshake, delegating credentials etc, and when transferring small files this overhead can become a significant fraction of the transfer time. Therefore it is possible to specify a file size limit (in bytes) with remotesizelimit. Any files smaller than this limit will use local transfer, even if local transfer is disabled through localdelivery="no". 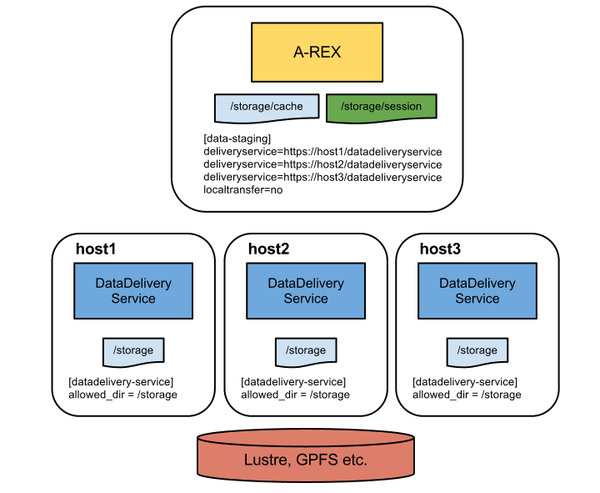 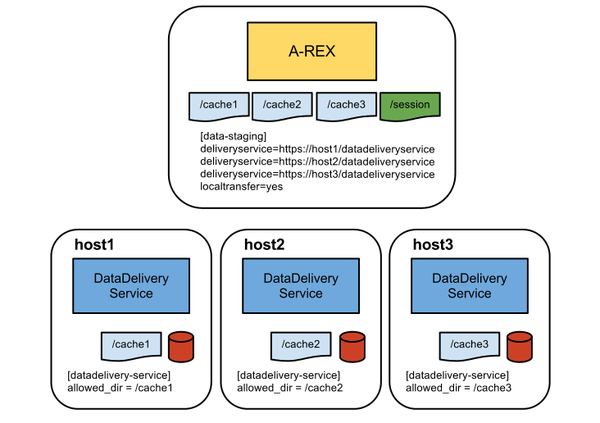 Each remote host has its own local disk as a cache and these caches are mounted on the A-REX host. DTRs will be sent to the host corresponding to the cache chosen for the DTR so that all cache transfers are to local disks. The session directory is not available on the remote hosts so all uploads and non-cache downloads will run on the A-REX host.

The remote datadelivery service may require a host certificate (see above) and allow incoming connections from the A-REX host, but no other incoming connections are required. It must have outbound connectivity to the world to perform the transfers. As explained above, access is normally restricted to the A-REX host and transfers restricted to the cache and session directories. For each transfer A-REX delegates the credentials of the user who submitted the job to the remote service, which creates a temporary file containing the credentials. This file is deleted when the transfer finishes. Creating a file should become unnecessary if pure in-memory credentials are fully supported by ARC and all transfer protocols.

The transfer process itself is executed under the uid of the session directory owner, unless the transfer is to cache in which case it is executed by root. It is therefore important that user accounts are synchronised across all hosts. The file systems with the cache and session directories must be mounted on the same paths with the same user access rights on all hosts.

HED services do not support legacy proxies such as those generated by default by voms-proxy-init. In order to use remote datadelivery services, the jobs must be submitted to A-REX using RFC proxies, which can be generated by arcproxy or giving the option -rfc to voms-proxy-init. If a legacy proxy is used, local transfer will be used even if it is disabled in the configuration.

When the first DTR is received by the Scheduler, it pings all the configured remote datadelivery services to check that they are running and to get the list of allowed directories from each one. If a service is unreachable it will not be used. If all services are unreachable then local delivery will be used even if it is turned off in the configuration. The allowed directories information is used to direct DTRs to services where the transfer is allowed. This procedure is repeated every 5 minutes (for the first DTR received after the 5 minute limit), and only the successful services are used until the next check (unless none are successful, in which case the check is done for every DTR until one succeeds). This means that configuration changes in the remote hosts will be picked up automatically after some time. However any changes in A-REX's configuration, such as adding a new remote host, require an A-REX restart to be effective.

If remote datadelivery services are enabled, the number of DTRs assigned to each one can be seen on separate plots in Gangliarc.